Analysts have told us time and again that the three key trends in IT are big data, mobility and cloud. You know that already, you have heard it in so many conferences; you also know that your investment in the three trends combined do not represents a big portion of your IT budget.

But today we will talk about big data only. Recently in an attempt to help demonstrate how big data is working for companies around the world CIO2CIO asked the heads of marketing in all large international IT companies operating in the Middle East to help us locate some of their big data customer success stories in or outside the region. Unfortunately more than eight weeks later we can confirm that there has not been a single answer. And even when you search the web for big data at work stories you will find very few real stories. Why is this the case? What happened to all the big data early adopters, how come they have nothing to show for their investments? And why are analysts continuing to put big data as a top priority for CIOs.

It seems however that big data continues to ride the hype curve no matter what. For example little known Palantir a startup big data technology provider based in Palo Alto California is said to have raised some $195 million in a funding round, this raises the company’s market value to some $8 billion – 14 times its expected revenue in 2014. So the hype and over excitement about big data goes way beyond IT analyst firms but also into the investment community. 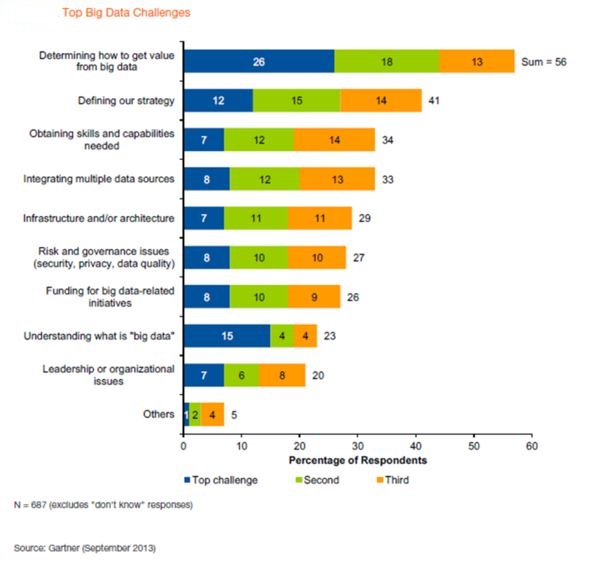 Of course we firmly believe that almost all forms of business analytics can and do have the potential to deliver immense value to most types of business, furthermore we actually believe that analytics including big data is the only technology that will allow CIOs to finally demonstrate the real value of IT to the business. But CIOs should adopt big data and analytics when they know they are ready not when Gartner says so. It is no secret that investments in data centers, ERP, collaboration and networking are all necessary for a business to process transactions and generate a balance sheet but that is taken for granted by the business. Analytics is the one technology space that does and will continue to make the business see the value of IT, the same cannot be said for the next upgrade of CISCO switches or EMC storage.
A recent Gartner report on big data revealed that Over one third (37.8 percent) of US businesses have already invested in big data, ahead of Europe, the Middle East and Africa (EMEA), which is at 26.8 percent; APAC, which is on 25.6 percent; and Latin America, which is at a distant fourth, with 17.8 percent.
Industries furthest down the investment path are media and communications (35 percent have invested), banking (34 percent), and services (32 percent), while government (16 percent) and utilities (17 percent) are laggards.
The hope is that for organizations adopting big data now, the learning curve is getting shorter, due to the learning gained by vendors and customers alike over the past 12 to 18 months. Despite the relatively low numbers of successful early adopters that have stories share or are willing to share their stories.
Other developments can help businesses accelerate returns on big data. For instance, valuable data can now be sourced from government data sets, often for no charge. According to a research study of open data economies by Cap Gemini (PDF), governments of the US, the UK, Canada, Australia and France are the trendsetters in open data initiatives.
As Gartner's report states, "for big data, 2013 is the year of experimentation and early deployment". We can expect to see a number of businesses approaching maturity in big data utilization from 2014 onwards, and many more following in their footsteps. The big data adoption curve resembles where cloud was 18 or 24 months ago — lots of learning, a little early experimentation, and not much deployment. As cloud has developed as a business capability, expect big data to develop similarly.
So as much as we feel that big data is hyped and over celebrated by IT media and conference organizers we still believe that it does have potential and it will deliver great value when innovatively implemented. One important thing to remember, big data is going to take much longer than many of the other so called trends, because it is not like a cloud that you can migrate too and go live, developing a big data strategy that will help an organization find the hidden treasures in its data is a much more complicated manner and it goes way beyond just IT.
Who has the best channel partners?